Bonds sold by some of the country’s largest technology, media and telecommunications companies have come under pressure this month, buffeted by sparring in US Congress over tax reform and as investors face a spate of multibillion-dollar new debt sales.

Risk premiums for investment grade rated US technology and electronics companies have climbed 8 basis points since the start of last week, according to data from ICE BofAML Indices.

Bonds sold by Apple, Sprint, Oracle, AT&T and Qualcomm have been among those under pressure, showing weakness that has not been mirrored by tech shares, which have climbed more than 1 per cent this month.

Investors pointed to the Republican tax plan for some of the weakness, with a proposal to tax multinationals a potential weight on groups with large international operations. The tech sector generates more of its sales globally than any other sector.

Merger talks between Disney and 21st Century Fox, as well as Broadcom’s spurned approach to take over Qualcomm and the end of negotiations between Sprint and T-Mobile, have also dragged on debt prices.

Andrew Brenner, head of international fixed income at National Alliance, said the rally in technology bonds this year coupled with possible changes to the tax code could be prompting some selling.

“We are seeing a little bit of profit-taking as we go into year-end,” he said. “Spreads have had a great run.”

Premiums, as measured by the spread over a benchmark US Treasury yield, on nearly 80 per cent of the most actively traded corporate bonds across the three sectors on Tuesday were wider for the month according to MarketAxess data.

In contrast, roughly a fifth of issues in those sectors were tighter for November.

“There are concerns that there will be more deals done and a lot of supply,” said Monica Erickson, a portfolio manager with asset manager DoubleLine Capital. 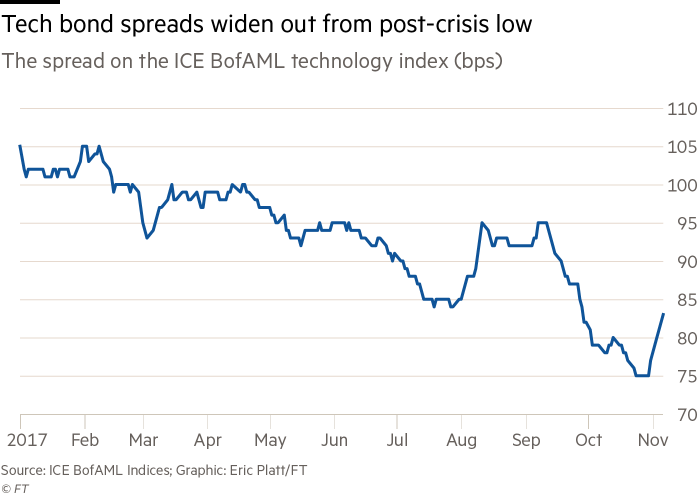 Ms Erickson added that more borrowing could ensue if many of the largest tech companies brought their offshore cash home and fund acquisitions or share buybacks and dividends.

A sense of market indigestion was highlighted by the second day performance of $7bn in bonds that had been sold by Apple on Monday.

The deal attracted $16bn of investor orders. The iPhone maker’s new 10-year debt, the most actively traded corporate bond on Tuesday, changed hands with a spread of 77 basis points halfway through the trading day. That was up 5 basis points from the previous day.

Oracle also tested investor appetite with a $10bn bond sale on Tuesday, in a deal it said the company said would fund general corporate purposes including share buybacks and dividends.

That adds to the $261.5bn tech, media and telecom companies already have borrowed through US debt markets this year, an all-time high, according to Dealogic.

“We’re at a time of year when there are a lot of issues [that] don’t have a lot of sponsorship,” added Matthew Freund, the chief investment officer of fixed income at Calamos. “It doesn’t feel like there’s a lot of real money buying.”