Federated Investors’ Mark Durbiano looks beyond the ratings for his high-yield fund—which also has a small slug of stocks.

Investors tend to associate high-yield bonds with risky companies that have taken on more debt than they can handle, or whose better days are behind them. While the junk-bond universe does have its share of dodgy issues, Mark Durbiano sees a far more nuanced market. Though the conventional wisdom is that “high leverage is bad and low leverage is good,” he says, “we don’t have a problem with higher leverage as long as a company can generate stable and predictable cash flow to pay its debt.”

Durbiano applies that philosophy across the $14 billion in high-yield assets he and his team manage for Pittsburgh-based Federated Investors. The $1.1 billion Federated High Yield Trust (ticker: FHYAX) follows the same overall approach as the firm’s core high-yield portfolios but with an equity twist: Up to 20% of the fund’s assets can be allotted to equities handpicked by Federated’s high-yield team, which includes co-manager Gene Neavin, nine other analysts, and two traders. 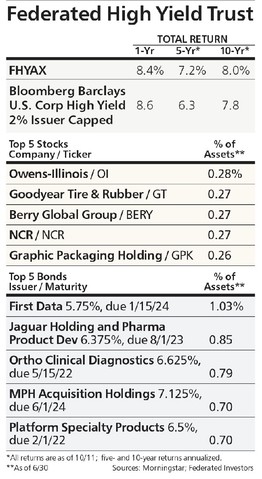 The answer lies in looking beyond credit ratings to understand the odds that an issuer will pay its dues. “Rating agencies overrate companies with low leverage and declining businesses, and underrate companies with high leverage and improving businesses,” says Durbiano. “We would rather invest in a packaging company with good, steady cash flow and high leverage than a steel company that has a better rating but unpredictable earnings,” he says.

Durbiano considers himself lucky to have landed a job at Federated when the now $360 billion assets-under-management firm was a fraction of that size, and the high-yield market was in its infancy—35 years later, high yield still fascinates him. “It’s often at the front end of new trends and technology,” he says, noting that Tesla, while not a holding, is a high-yield issue.

One of the fund’s largest bond positions is payment technology giant First Data (FDC). As is the case with nearly half the fund’s holdings, First Data became a high-yield issuer after a private equity investor acquired it in a leveraged buyout; in this case, KKRbought the company in 2007, using First Data’s assets as collateral to close the deal. “At the end of 2008, there were First Data bonds trading at 60 cents on the dollar,” says Durbiano. Those bonds have since been retired and replaced, and comparable bonds trade above par. First Data went public again in 2015, but its ratio of debt to earnings keeps it in the realm of high yield.

Valuations have come up across the high-yield universe, but “we still think credit spreads are going tighter,” he says, referring to the difference in yield between high-yield bonds and Treasuries. The average yield for the Credit Suisse High Yield Index has historically been 520 basis points (100 basis points is one percentage point) higher than comparable Treasuries, he says, but have gotten as low as the high 200s. “Today we’re at 410 basis points, suggesting we haven’t troughed yet,” says Durbiano.

Meanwhile, Federated’s high-yield team is still uncovering well-run and profitable companies categorized as high yield. Take commercial insurance brokers, such as Hub International and AssuredPartners. These asset-light intermediaries generate high degrees of cash flow and, like First Data, have entered the high-yield market because of private equity purchases funded by debt. “The PE guys are rolling up the market and using leverage to finance the deals,” he says, noting that private equity firms like the businesses for the same reasons he does. “Many of these will eventually come public.”

When that happens, the Federated team often has a head start, having covered the company for years before. “It’s the same exact team, approach, and philosophy,” says Neavin, who manages the fund’s stock sleeve, nearly 8% of assets now. “If we own the stock, we probably own the bond.”

One such example is party-supply retailer and wholesaler Party City (PRTY), which issued CCC+ rated bonds in July 2012 as part of a buyout by private equity firm Thomas H. Lee Partners. Party City went public again in 2015 and used some of the proceeds to pay down its debt. The credit agencies have since upgraded the bonds; the stock, which the fund has owned off and on, has languished along with most retail stocks. What investors are missing, says Durbiano, is that roughly 80% of the company’s profits come from its wholesale business, both to its own stores and other outlets.

Likewise, Luxembourg-based glass and metal packaging company Ardagh Group(ARD) has grown its business through acquisitions funded primarily by debt; the company’s debt-to-earnings ratio puts it in the high-yield category. “The packaging industry tends to be consistent and stable,” says Durbiano. Ardagh has made Heineken’s iconic green bottles for the last 25 years; Coca-Cola (KO) and L’Oréal(OR.France) are other big clients. In March 2017, Ardagh went public and used some of the proceeds to reduce its leverage. Even before the credit agencies raised their ratings, investors bid up the bonds, which recently traded at 110 cents on the dollar. Ardagh’s stock is still hovering just above its $19 initial-public-offering price, but the managers are happy to bide their time while the company continues to generate strong free cash flow.