The Great Unwind of extraordinarily accommodative global monetary policy got underway in earnest in June, 2017. If the global and Canadian economies are faring so much better, why have returns for Canadian investors on globally diversified portfolios have been hammered since the first five months of 2017?

The Great Unwind of extraordinarily accommodative global monetary policy got underway in earnest in June, 2017. Until then, though the Fed had begun reducing monetary ease at the end of 2015, other major central banks had maintained very easy policies.

Then, as if on cue, the European Central Bank expressed confidence in the strength of Euro Area growth and mused about reducing its bond purchases (June 8); the Bank of Canada’s top officials suddenly executed a U-turn from ruminations about cutting rates in January to contemplating early rate hikes (June 12-13); the Federal Reserve hiked its policy rate and discussed reducing its’ $4.5 trillion balance sheet (June 14); and Bank of England Governor Mark Carney said the BoE may need to begin raising interest rates and would debate a move in the next few months (June 28).

Increasing the likelihood that these central bank unwinding moves were coordinated was the Bank for International Settlements Annual Report, released on June 25, titled Monetary Policy: Inching Toward Normalization, which laid out the case for removing monetary stimulus even though inflation remains well below target in virtually all of the major advanced economies.

The coordinated central bank (CB) unwinding of monetary stimulus has been widely applauded as a recognition that global growth has strengthened, global slack has diminished and global debt-to-GDP ratios had risen to all-time highs, posing financial stability risks. But despite the fact that unprecedented global monetary policy accommodation had fuelled asset price growth for years, few commentators raised concerns that unwinding monetary policy stimulus might have negative consequences for global asset prices.

The chart below shows year-to-date total returns for these portfolios, in Canadian dollar (CAD) terms. 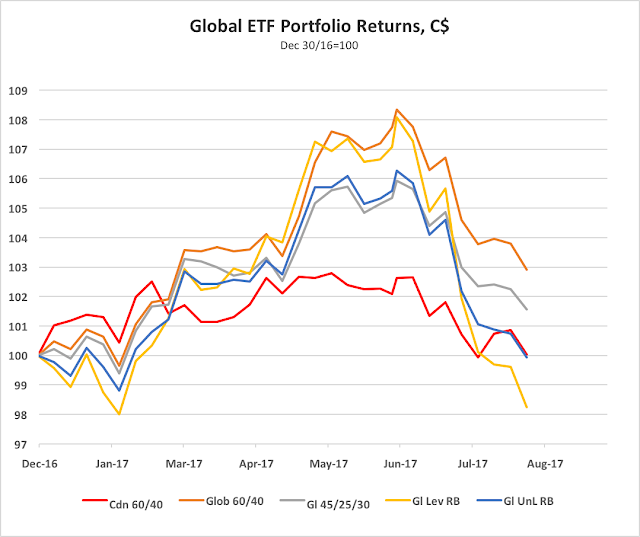 As is evident from the chart, all of these portfolios performed well into early June, peaking in the week ending June 2. After the ECB signalled its change of direction on June 8, all of the portfolios began to give back their gains. The Global 60/40 portfolio, which had the strongest year-to-date (ytd) gain of 8.2% on June 2, has given back about two-thirds of its gain and was up just 2.9% for the year by the week ended July 28. Hardest hit was the Global Risk Balanced Portfolio, which went from a ytd gain of 8.1% on June 2 to a ytd loss of 1.8% by July 28. The gain in the all-Canadian portfolio, which had struggled to a 2.9% ytd return by June 2, had been erased to a 0.1% loss by July 28.

If the global and Canadian economies are faring so much better, why have investment returns for Canadian investors turned so negative in the Great Unwind? The answer is that the swift turnaround in the stance of the BoC caught markets by surprise and caused the Canadian dollar to surge against the US dollar and other currencies. The surge in CAD has imposed losses on unhedged investors in global ETFs denominated in US dollars. As shown in the chart below, every ETF tracked in this blog has experienced negative returns in CAD terms since the CB Unwind began in early June. 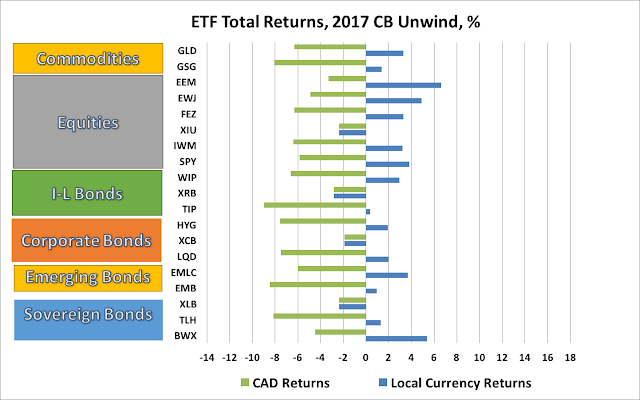 The more hawkish BoC stance has also seen Canadian interest rates back up, pushing Canadian bond prices down and causing losses on Canadian bond ETFs. Making matters worse, the Canadian equity ETF (XIU) has been one of the worst performers (in local currency terms) among global equity ETFs since the Great Unwind began, losing 2.4%. While US, Eurozone, Japanese, and Emerging Market ETFs have had better local currency returns, the surge in CAD has meant that these ETFs have experienced even bigger losses than XIU in Canadian dollar terms. 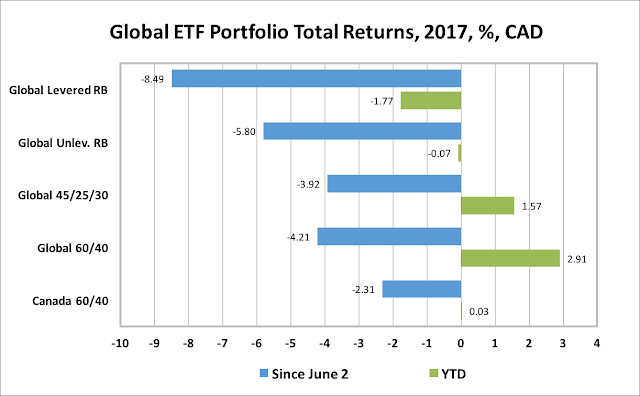 There is a slight silver lining to the Great Unwind black cloud for Canadian investors. The chart below compares the Great unwind losses for currency unhedged portfolios with those portfolios that were USD-hegded. If foreign ETF holdings were USD-hedged, the globally diversified portfolios would have experienced small gains since June 2, much better performance than the all-Canadian portfolio. 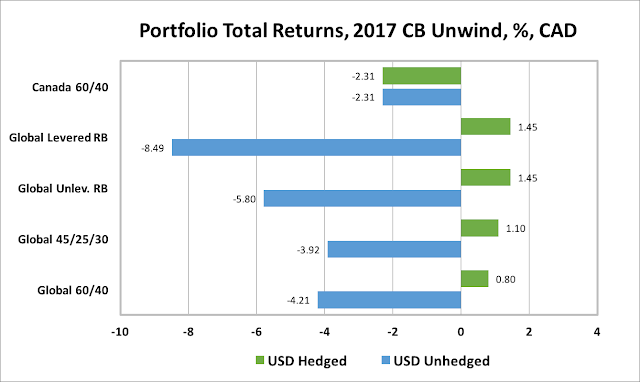 Unfortunately, most Canadian investors do not fully hedge their foreign currency exposures. Indeed, some large pension funds and the majority of individual investors do not hedge at all. My guess would be that far less than half of Canadians’ holdings of C$1.8 trillion of foreign portfolio investments (of which $1.1 trillion are USD-denominated) are currency hedged. Based on this assumption, and on the holdings of Canadian bonds and equities, my back of the envelope estimate of the losses to Canadian investors since the beginning of the Great Unwind in early June would be in the neighbourhood of C$150 billion.
Categories: All News, Market news
| Tags: economic view, great unwind, investment portfolio returns, macroeconomics, Ted Carmichael