The big surprises of 2016 – Brexit, the impeachment of President Dilma Roussef in Brazil, and the election of Donald Trump as President – will have significant economic impacts in 2017 and beyond.

It’s time to look ahead to global macro prospects for 2017. I have posted similar outlooks for the past three years and followed up at the end of each year with an assessment of those forecasts. I assemble consensus views for the year ahead on global growth, inflation, interest rate and exchange rate outlooks which are presumably already built into market prices. The consensus view, as Howard Marks says, is “usually unhelpful at best and wrong at worst”. What will move markets in 2017 is not the current consensus forecast, but the ways in which actual economic developments diverge from that consensus.

The big surprises of 2016 – Brexit, the impeachment of President Dilma Roussef in Brazil, and the election of Donald Trump as President – will have significant economic impacts in 2017 and beyond.

The US equity market, as well as those of several other countries, has responded positively to Trump’s election. Investors have essentially placed bets that Trump’s early moves will focus on reducing taxes and regulations and that his campaign rhetoric about ripping up trade deals and deporting millions of illegal immigrants will proceed with caution.

Many high profile economists – Krugman, Roach, and Rosenberg – are warning of much more pessimistic outcomes (some of these views seem quite partisan). Some warnings take Trump’s election rhetoric on trade and immigration at face value. Others are based on the notion that Congress will not actually implement many of Trump’s election promises.

Despite the market’s optimistic response and the aforementioned economists’ warnings, economic the consensus forecast has barely changed since before the US election. I do not think that means the election outcome will have little effect on economic and financial market performance in 2017 and beyond. I think it means that forecasters are a bit like deer in the headlights, not knowing yet which way to jump. The consensus remains unchanged as some forecasters shade their views in favor of the market’s optimism and others shade theirs in favor of the more pessimistic view. As I said in my review of 2016 forecasts last month, “2017 will undoubtedly once again see some large consensus forecast misses, as new surprises arise. As an era of rising asset values supercharged by ever-easier unconventional monetary policies seems to be coming to an end, the scope for new surprises to cause dramatic market moves has perhaps never been higher”.

With the foregoing in mind, here is what the consensus view is telling us about 2017:

This year’s growth forecasts are notably more conservative than last year’s, as economists belatedly turn more cautious after several years of growth disappointing to the downside. Inflation once again is expected to move higher but, with the exception of the Fed, central banks are not expected to respond to higher inflation by tightening policy.

This year, forecasters tell us once again that global growth will pick up in 2017 to 3.4% (IMF October forecast), or to 3.3% (OECD November forecast and the December average of global commercial bank forecasts). 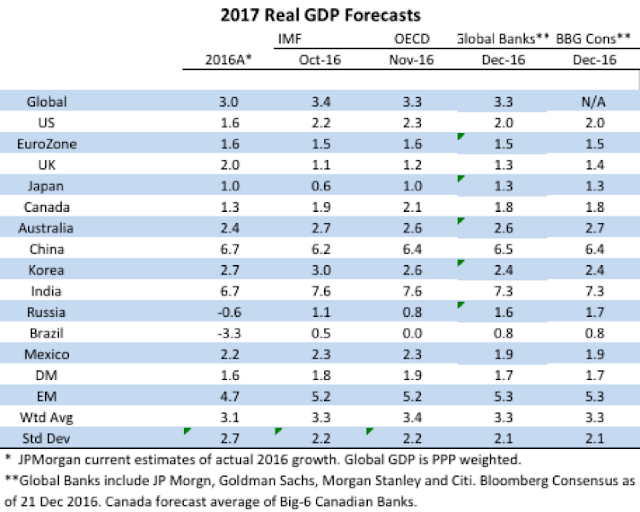 While global growth is expected to be stronger in 2017, an important divergence between DM and EM growth performance is expected to continue. EM growth is consistently higher than DM growth, but the important divergence is that, for a third consecutive year, DM economies (with the exception of the UK) are expected to grow at or above their trend rate of growth, while most EM economies (with the exception of India) are expected to grow below their trend rate. In the chart below, the blue bars show the 2017 consensus growth forecast versus the OECD estimate of the trend growth rate for each economy. 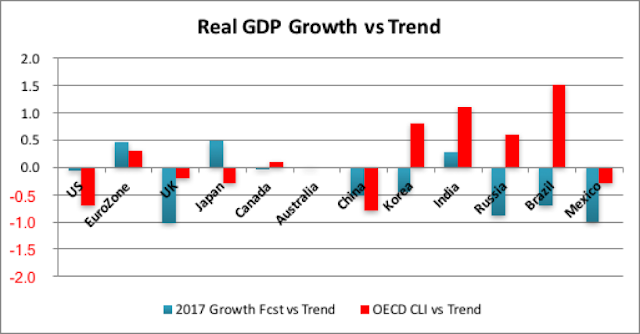 In the chart above, the red bars show the latest OECD composite leading indicators (CLIs) versus trend for each of the economies. Unlike in the past two years, these CLIs generally support stronger 2017 growth than economists are forecasting, with a few exceptions.

Global inflation has consistently fallen short of expectations since 2013. This occurred in spite of unprecedented efforts by central banks to fight disinflation. 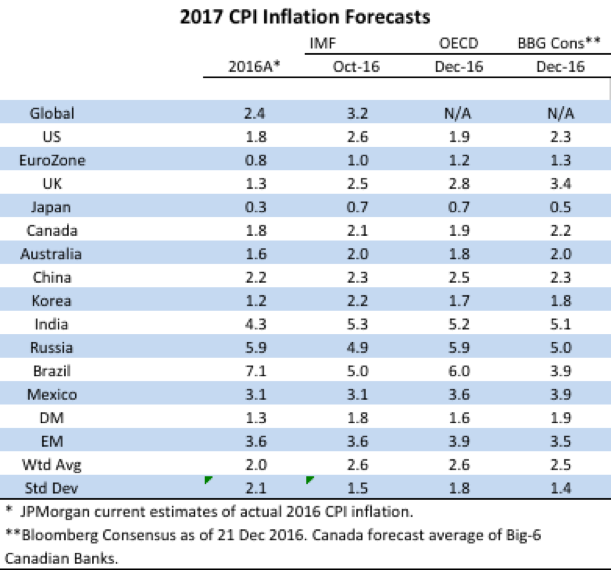 These forecasts, most of them made between mid-November and early-December, may already subject to upward revision. Crude oil prices ranged from $45 to $49 per barrel during the period these forecasts. Since then, in the wake of the December OPEC meeting, the price has risen to $54/bbl in late December and looks likely to maintain the higher price into early 2017.

In all of the DM economies we track, inflation is expected to rise. In EM economies the picture is more mixed, with inflation expected to fall in Brazil and Russia, where currencies have strengthened markedly over the past year. In Mexico and China, where currencies have weakened, inflation is expected to rise. Considerable slack remains in the global economy, especially in EM economies. But wage growth is picking up in some countries. Commodity prices are rising. Inflation expectations are rising.

As already mentioned, some economists, who are not part of the consensus, have a much darker view of 2016 prospects. Paul Krugman and Stephen Roach warn that Trump will set off trade wars with China, Mexico and other US trade partners. Krugman says, “Will this cause a global recession? Probably not … What the coming trade war will do is cause a lot of disruption … and quite a few American manufacturing operations would end up being big losers.”

Russell Napier sees a different problem with the consensus:

The consensus may be bullish on the USD exchange rate and while consensus is regularly wrong, on this occasion it might be wrong because it is not bullish enough!

Napier argues that “the USD has much, much further to rise” and that this will present a particularly difficult environment for China, which is also one of the major targets of Trump’s protectionist rhetoric. Rising US interest rates have spilled over globally and have aggravated China’s capital flight and accelerated the decline in China’s foreign exchange reserves. Napier suggests that it is “time for China to grow up and run an independent monetary policy choosing the appropriate price or supply or money without reference to the level of the exchange rate.” A strengthening USD and a depreciating CNY are “turning the deflationary screws on the global economy. It will likely be up to the Fed to stop the rise of the US dollar, but what ammunition is at its disposal, particularly if the President’s fiscal policy is indeed stoking domestic inflation?”

David Rosenberg graciously offered up a free year-end piece, which the Globe and Mail ran with the headline: “Forget inflation – here’s what really will happen in 2017”. The headline is a bit misleading because Rosenberg, quite reasonably, says “I actually find it senseless to provide a forecast for the entire year ahead at this time”. While declining to provide a forecast, Rosenberg is pretty sure about one thing: “I do have as strong view that inflation very much is going to be the non-event it has for the past several decades”. Rosenberg provides several good reasons why Trump’s platform will be disinflationary. Although bond yields will be volatile over the course of 2017, Rosenberg thinks that as inflation fears abate, the 10-year US Treasury yield will fall and “close the year around 2%”, about 70 basis points lower than the consensus forecast.

Another non-consensus view is that of Wall Street’s number one ranked strategist, Francois Trahan, Head of Portfolio Strategy at Cornerstone Macro. In this video Trahan goes against the consensus with a view that the equity bull market is almost over and it’s time to get defensive. He makes this argument partly on the assumption that Congress will not pass all of Trump’s pro-growth policies and their effect will be delayed but, more importantly, because US monetary policy is tightening, global financial conditions are tightening, and growth is about to slow significantly. He argues that macro policy forces already in the pipeline will outweigh anything Trump does in 2017 and the result will be lower US corporate earnings and a lower P/E ratio, so that the slowdown will have a disproportional impact of equity prices. Trahan expects US data to weaken in 1H17 after a burst of strength in late 2016. The result will be a significant correction and possibly a bear market in equities. I have to give Trahan credit; he has the conviction to go against the frozen Wall Street consensus.

2016 turned out to be another year in which global growth and inflation were both modestly disappointing and the political surprises were widely viewed in a negative light. Risk assets nevertheless performed very well. The legacy of the political surprises of 2016 is policy uncertainty for 2017. Some of the unanswered questions include:

At the moment, I would be quite suspicious of the advice being offered by many investment strategists. Those who have been long the growth trade and have benefited from the “Trump rally” in equity markets are suggesting stay with the trade in the near term but be flexible and prepared to exit should the recent optimism be blunted by disappointments. Those strategists who went into the US election in a defensive position and remain skeptical that Trump’s policies can “Make America Great Again” are suggesting maintaining larger than normal cash positions which may be deployed when risk assets correct sometime in 2017.